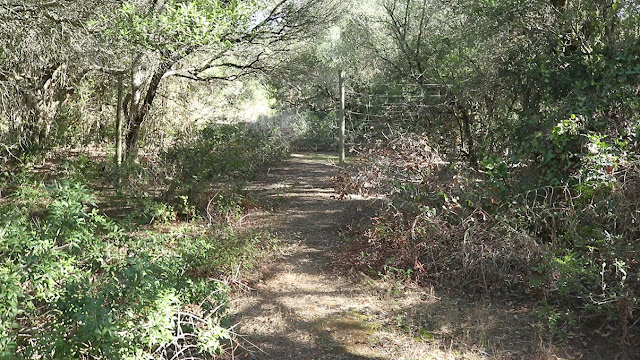 A path to go and come back
--
Participative site-specific action
NMAC Contemporary Art Foundation, Vejer
October 2017
-
A sensitive walk in nature born with the aim of awakening personal limitations and borders; transforming them into connecting bridges. An intent to blur personal paradoxes and assumptions using nature as teacher.

“No matter where we live, none of us can escape boundaries and enclosures; between the personal and the collective, between dream and reality, between life and death.”

Are there roads that lead nowhere?

I found a path in the sculpture park of the NMAC Contemporary Art Foundation. A walk in nature, evoking memories of many previous steps. Steps whose footprints created the path. Was it going to take me to the museum’s next piece of art?

It took me to a fence in the middle of the forest. A delimitation out of place, since the plants and trees were just as abundant on the other side of the fence.

Somehow the span of the walk had already modified my perception, so a barrier in the middle of the woods seemed to me pretty odd. But it was normal. It was the end of the museum. ‘Even art has its borders’ - I thought - ‘And needs to be safeguarded.’

So there I was, suddenly in a borderland, ‘That shrub on the other side is not protected, as the one that brushes my feet. Which side am I on? On this side of the fence am I protected or locked up? Maybe this wire barrier just gives me a new prism to see through?’ My eyes wandered around the thin cables interlaced in the mesh while slim boundary lines traced my mindscape. I followed these edges and I felt part of the system they composed. I saw a matrix formed of thoughts and experiences: my own. ‘If I immerse myself in one of these cavities, I no longer have the vision of the totality.’ I saw each empty cell as a being, a container entity that is related to the others through its boundaries; limits that connect, bridges that unite. They created the pattern of a complex system. A body of cells. 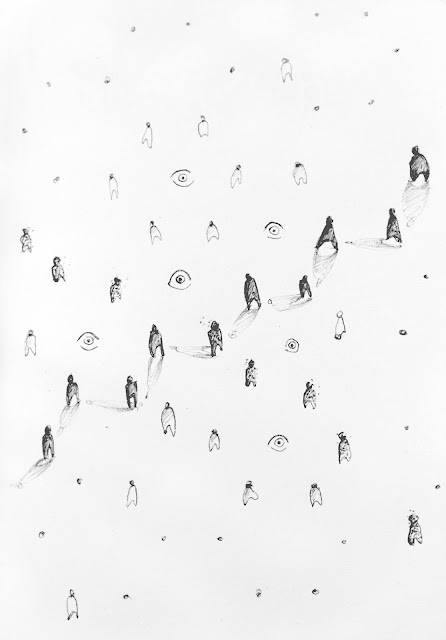 Each cell was interdependent with its neighbor. Mutually reliant. It made me think of the symbiosis and I saw the contrast in between the powerful and the weak, the center and the periphery, the known and the unknown, the feminine and the masculine, me and the Other. I saw everything interconnected. I saw a living mirror. An ideal ecology. And I was part of it.

There are paths to walk and come back.
There are moments to grow backwards.
--

I offered the experience of this promenade to my companions in the Bee Time residency. They took the same road and walked their own path. Their experience brought into awareness their own borders and then I understood the problem had been made visible, for them and for myself.

Tricia Enns
I was a bit sceptical and resistant to be quiet. I don’t like being told what to do! But during the walk I found a stillness in me, and felt a strong connection to nature, there was an anticipation to see what “came next”, and yet when I got to the fence I was angry. Angry that the walk ended, and also angry again that someone controlled me, and “told me what to do”, told me to stop and not go any further. I was very sad in the end. Sad for the earth, for the environment, and for us and this society we find ourselves living in where land can be owned.

Láilá Holwerda
To me the walk was a symbol of boundaries. It felt like being in nature, and feeling free and on a path that would bring me any-where I felt invited to. Finding the gate was shocking. It brought me back to my ancestors, to the Sami people who never owned land but were suddenly restricted by others owning land. Their lifestyle had to change totally because of fences. And here I stood before this fence also thinking of all the fences that make us go back and find another route, another path, having to go back on the same path. To me going back on the same path made the path look totally different than the first time I walked it. It felt less beautiful, and I looked more down than around me. I did not felt the space in that time to look at other possibilities, I just felt an illusion of freedom.

Carrie Foulkes
The experience brought up many thoughts and feelings. Conceptually it spoke to me of borders - particularly the arbitrary walls humans erect between countries and peoples, and also the barriers we’ve built between us and the natural world. As I walked without speaking, I felt free to look around me and notice the warm play of light on the plants, the ground, my skin. I made eye contact with others returning - I passed one person who had stopped before ‘the end’ and was sitting in a clearing.

I didn’t know where I was headed, but the title - Making the problem visible - made me suspect that the walk was going to change, I was going to encounter something. So when I reached the fence and couldn’t continue I laughed. Of course! The problem is we are not free. We are not free because we have made ourselves unfree. The fence seemed incongruous there in the woods. I felt an urge to climb over it. The landscape on the other side looked the same, but its inaccessibility made me curious.

The idea that the problem needs to be made visible also made me think about how many of our issues are ideological, immaterial - the roots of ‘the problem’ are in our ways of thinking. To make it visible introduces the possibility of change. I also reflected on the dualism entrenched in our relations to each other and the world around us. The sense of separation. Individualism.

The walk back was for me the most reflective time. I welcomed that moment of silent contemplation. The act of walking, of being in motion, had my thoughts flowing. I feel sometimes that I cannot see and speak at the same time. So this proposal gave me the chance to simply see.

Published in the monograph series HexReflex Publications, Issue I/2018 Holon - Systems Thinking And The Ecological Approach